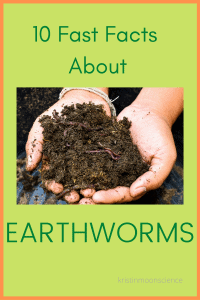 I have a confession to make: I’m a worm rescuer.

You see, each day on my morning walk, I find at least a few worms wiggling on the sidewalk.  I bend over, pick them up, and relocate them to the grass.

Why? Because with the extreme heat and the ample sunshine, I  know they don’t stand a chance on the sidewalk.  In fact, the sidewalks in my neighborhood are littered with poor little worm corpses.

Although worms are often overlooked and underappreciated, they are an important part of the environment.  So I decided to shed a little light on these creatures by sharing 10 quick facts about earthworms. Maybe I’ll even convince you to be a worm rescuer too.

While worms may not be the first thing that you think of when you think of an animal, they do belong to the animal kingdom.  They are invertebrates, meaning that they lack a backbone.  They are also cold-blooded, which means that they are unable to generate their own heat the way that warm-blooded animals can.  This also explains why you’re more apt to see them out and about during the warmer temperatures.  During the cold months, they burrow deep into the ground (even up to 6 feet below the surface!) and hibernate.

2.There are more than 2700 different kinds of earthworms around the world

Yeah, I was surprised too.

Every earthworm has both male and female reproductive organs. That means that a single worm will produce both sperm and eggs. Even so, worms typically need another worm to mate.  During mating, each worm will fertilize the eggs of their mate.

No, I’m not kidding.

Following mating, each worm will create a cocoon that contains the fertilized eggs.  I wish I had a picture to share, but I have yet to find a cocoon in my garden. (I really want to find one though!) From what I’ve seen online, the cocoons look like unpopped popcorn kernels (and are about the same size).

It typically takes about 3 weeks for the baby worms to emerge.

5. The body of an earthworm is divided into segmented rings

6. Worms breathe through their skin

Earthworms don’t have lungs, but they still need to breathe in oxygen and expel carbon dioxide.  The gas exchange happens by diffusion across the worm’s very thin skin. For diffusion to occur, the skin must remain moist. If the skin dries out, the worm won’t be able to breathe.    Worms secrete a thin layer of mucus onto their skin to prevent dehydration, but the mucus is no match for too long in the sun and heat.

7. Worms lack eyes but they are able to sense light

They sense light through specialized cells in their head.  Because they can sense light, many worms avoid surfacing while the sun is out.  Night crawlers get their name from the fact that they typically emerge from the ground during the night hours.

8. Earthworms are important residents in your garden

As the worms burrow, they aerate the soil allowing air, water, and nutrients to reach deep into the soil. As worms digest the soil, they break the organic components down into forms that can be used by plants. In fact, many gardeners buy worm “castings” to supplement their garden soil.

9. You really shouldn’t try cutting a worm in half to see if it regenerates

While I know that we’ve all heard that if you cut a worm in two, both parts will regenerate, that’s not really true for earthworms.  Depending on where you cut the worm, it is possible for the anterior (head) portion of the worm may survive, but the tail portion won’t.

10. Worms are a major food source for lots of creatures

Worms make up a large portion of the diet of birds.  In fact worms (along with caterpillars and other insects) make up 40% of a robin’s diet.  One site claims that an American Robin can eat up to 14 feet of earthworms in a single day!

Given that fact, you may think that by rescuing the worms from the sidewalk, I’m depriving the birds of their food. The thing is, birds find the worms by sight and sound based on the worms’ movement. Once the worm’s skin starts to dry out and they stop moving, the bird won’t be able to sense it anymore. This is evident by the number of dried up worms all over the pavement.

So the next time you see a worm, say howdy. Worms do so much good for the planet, and for that reason, I’m proud to be a worm rescuer.

If you’d like to explore the anatomy of a worm without the yuck factor, I highly recommend the 3-D model of the earthworm from Getting Nerdy with Mel and Gerdy. The models are fantastic, and are one of my Dissection Alternatives for High School Biology.

The Adventures of Herman: The Autobiography of Squirmin’ Herman the Worm