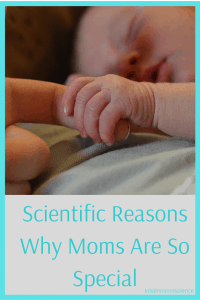 Each year on Mothers’ Day, we take time to show appreciation to the mothers in our lives.

If you’re anything like me, you may have a special meal, gift, or shopping excursion planned to celebrate your mom.

I’m here to tell you that you owe your mother thanks—not only for the hours spent preparing meals, helping with homework, and character training that your mother has invested—but also for some things you may not have ever considered before.

Our cells contain miniature organs called organelles, each with a specific role to play to keep our cells—and us—alive.  The mitochondrion (mitochondria, plural) is one of these organelles.

Known as “the powerhouse of the cell”, mitochondria provide the fuel that keep us alive.

Mitochondria are the site of cellular respiration: a process through which sugar molecules supplied by the food we eat are broken down into carbon dioxide and water. Energy stored within the chemical bonds of the sugar molecules is transformed into ATP, the energy currency of the cell. ATP is able to be stored, transported, and used by the cell for any process that requires energy.

Because mitochondria supply the energy necessary for all cellular processes, there are many mitochondria in each cell. Cells that require more energy (such as heart or muscle cells) can have thousands of mitochondria per cell.

The vast majority of human DNA exists as chromosomes in the nucleus of the cell. It is this nuclear DNA that determines our eye color, hair color, whether or not we have dimples, and so on.  These genetic traits are defined by the genes each of us possess that are located on our nuclear DNA.

We Only Inherit Mitochondrial DNA from Our Mothers

What does this have to do with mothers?

Quite a lot, actually.

So thank your mom for more than half of your total DNA and for ALL of your mitochondria.*

Let’s revisit the chromosomal DNA found in the nuclei.

You probably know that, as a human, you have 46 chromosomes in each of your cells.  These 46 chromosomes come in 23 pairs.  22 of these pairs are called autosomes, and contain the same genes in the same location no matter whether you are male or female.

At conception, you received one chromosome making up each of these 23 pairs from your mom and the other chromosome from the pair from your dad.

Consider the picture below, which compares the size of the X and Y chromosomes.

As females, mothers have only X chromosomes to pass on to their offspring from their sex chromosomes.  As males, fathers can pass on either an X or a Y chromosome.

In other words, the mother’s contribution to her offspring’s 23rd chromosome is always X.  It is the father whose genetic contribution to the 23rd chromosome pair which determines whether the child is a male or female.  (Side note: this makes King Henry VIII an even bigger jerk for killing the wives who wouldn’t bear him a son).

Women Are Permanently Changed When They Become Mothers

If you asked your mother, she could probably tell you many ways that her body changed following pregnancy. She may have stretch marks, scars, varicose veins, or wider hips. Her shoe size may have even changed!

However, she may not be aware of all of the changes that have taken place in her body, including:

So the next time your mom starts to get on your nerves, cut her some slack. She went through a lot to bring you into this world, and you literally wouldn’t be the same without her.

The Secrets of the X Chromosome

*A new study which appeared in the November, 2018 issue of the journal Proceedings of the National Academy of Sciences of the United States of America found that in a small cluster of individuals, mitochondrial DNA may be both maternally and paternally inherited  ( Biparental Inheritance of Mitochondrial DNA in Humans ). While this seems to be a rare phenomenon,  more research is needed to understand how and why paternal mtDNA is inherited in these individuals.  To learn more, click here: Not Your Mom’s Genes: Mitochondrial DNA Can Come from Dad

**Most of the time, the fact that males only have one copy of genes on the X chromosome isn’t an issue.  However, there are some diseases and disorders which are passed along on genes located on the X chromosome. Oftentimes, females are not affected by these disorders since they have two copies of the X chromosome.  If one of a female’s X chromosomes has the faulty gene, it is often masked by expression of the functional gene on her other X chromosome. However, if a male has one of the faulty genes on his single X chromosome, he will be adversely affected.  Such disorders are said to be sex linked, since they are carried on the sex chromosomes and clear patterns of disease can be seen between the two sexes of the species. Examples of sex-linked traits include red/green colorblindness, male-pattern baldness, Duchenne Muscular Dystrophy, and hemophilia. To learn more about sex-linked traits and other forms of so-called non-Mendelian patterns of inheritance in my online course Genetics and Heredity.

1 thought on “Scientific Reasons Why Moms Are So Special”